Alligators, wolves, foxes — and more!  Learn about the critters and creatures that inhabit the Green Swamp, the forces of nature that created the swamp and maintain its watery environment, and Carolina Bays and the Waccamaw river basin.  Explore the ecological intricacies of the Green Swamp through our diorama in the Water Ways Gallery of the Museum of Coastal Carolina. Ed Ovsenik will be the presenter.

Mr. Ovsenik received a BA in Biology, worked towards an MS in Marine Botany, and has a Juris Doctorate in Law.  His career was centered on Environmental, Health, and Safety compliance in government and industry, including technology driven companies in the chemical and computer software sectors.  Mr. Ovsenik currently advises clients on Governance, Risk, and Compliance issues impacting their for-profit and non-profit organizations. During his career, Mr. Ovsenik worked closely with students on technical and scientific matters, advising, guiding, and mentoring those students in elementary through college ages. Mr. Ovsenik’s current interests include researching the genesis of Carolina Bays, photographing the Green Swamp ecosystem, and researching the timber and lumber industry of the Green Swamp and the Marine Stores industry in Brunswick County during the 18th and 19th centuries.

In Living in the Future’s Past, Academy Award winner Jeff Bridges guides us on a journey into the heart of human nature and explores how our species operates in an inescapably interconnected world. Featuring experts from across cultures, scientific disciplines, and political philosophies, the film contextualizes our modern predicament within a geologic time frame. Far from another alarmist film on the impending destruction of our planet, Living in the Future’s Past illuminates how each of us can contribute to saving Earth and furthering humanity. This film is produced and presented by Jeff Bridges along with filmmaker Susan Kucera.

The filmmaker’s statement: “Living in the Future’s Past is a definitive departure from the usual ‘ecological documentary.’ As a documentarian, I’ve always been interested in what makes us and other animals tick. The film gives us a greater understanding of both the physical and unconscious , mechanisms at play in our inner and outer world, like ‘optional foraging strategy’ or sexual selection. We’re not the only animals with social and economic relationships to the environment.” – Susan Kucera.

This documentary movie is 83 minutes long, so run time will exceed our normal one-hour program.

Come learn how you as an individual can make a difference regarding our past and into the future!

Terry Bryant will present this movie. Terry has been the Executive Director of the Ocean Isle Museum Foundation since July of 2012. She retired with the state of North Carolina after serving in the field of education in the community college system. She also spent seven years at the NC Aquarium at Fort Fisher. She has a two-year degree in accounting, a bachelor’s in recreation/leisure studies, and a master’s in educational media: instructional computer technology. She is married to Ronnie Bryant, former CIO at Brunswick County Community College.

This program takes a look at the composition of sea water, the various microscopic plankton (plants and animals) that live in the water, and the effects of man-made pollution on the quality of ocean water and the marine animals that inhabit it.  Informational handouts will be available to take home for further study.  There will also be some surprises from other various local water samples and what you will see in the water! This program is presented by Allison Smith.

Allison Smith is a science educator with more than 20 years of experience. She taught Science Education in both the public and private sectors. She has a BS in Deaf Education and a MAED in Science Education. She and her husband are published authors and local paranormal historians. They own and operate the seasonal OIB Ghost Walk, which is in the top ten list of things to do at Ocean Isle Beach. She enjoys volunteering at the museum and in the local community and raising her two boys at the beach.

Learn about air pollution — what it is, how to read an air quality index, and what we can do to reduce it. Interactive demonstrations and discussions will be included to determine what air pollution is, where it comes from, and how to measure air pollution.

This program is presented by Jamie Justice, the Education Coordinator for the Museum of Coastal Carolina and Ingram Planetarium. She received her Bachelor of Science in Marine Biology from Bowling Green State University and her Master of Science in Environmental Science with concentrations in Marine and Coastal Education and Coastal Management from the University of North Carolina Wilmington. Jamie is originally from Portsmouth, Ohio and moved to Wilmington, North Carolina for graduate school in 2017. Before coming to the Museum, she has worked in a variety of educational positions at summer camps and schools. 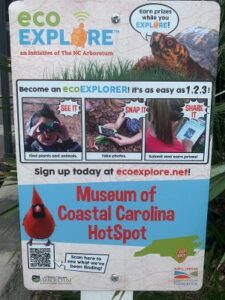 Did you know that the Museum of Coastal Carolina is an ecoEXPLORE hotspot? ecoEXPLORE (Experiences Promoting Learning Outdoors for Research and Education) is an incentive-based citizen science program for children in grades K-8 developed by the NC Arboretum. ecoEXPLORE combines science exploration with kid-friendly technology to foster a fun learning environment and encourages children to explore the outdoors and participate in citizen science. You can sign up for a free account at ecoexplore.net and collect data while you visit the museum. You do not have to have an ecoEXPLORE account prior to visiting, although it is recommended; you can collect data to upload at a later date. Relevant exhibits will be labeled with an ecoEXPLORE logo for guidance. To learn more, check out https://www.ecoexplore.net/